Where Markets are still free - The Bitcoin Enhanced Investment Proposition

As a savvy investor you understand, in the words of Guggenheim’s Scott Minerd we will never return to free market capitalism. Like Paul Tutor Jones you know we are experiencing the Great Monetary Inflation (GMI) and have diversified into Bitcoin.  You probably already own gold so what next?  Where are markets still free?  Where is the risk still acceptable?

Paul Tudor Jones
First ask where are they not free?  Where does the market rely on fiat money?  Which asset carries the risk of centralised counterparties for its operation or trading?

These features are what makes Bitcoin and gold such obvious examples of where markets are still free.  Neither depends on the fiat system.  Neither depends upon counterparties that would represent a single point of failure.  Each has inherent value.  Bitcoin operates as a speculative instrument, gold as a store of value and hedge against hyperinflation.

Is that it?  No.  In February 2018 I created Bitcoin Enhanced as a speculative investment vehicle where free markets can continue to thrive.  Since that time it has been quietly building its track record so that while Bitcoin has been flat over the period Bitcoin Enhanced forecasts have returned 50% p.a.

Do you wish you had got into Bitcoin in the early days when 10,000 would buy a pizza?  Think of Bitcoin Enhanced as pizza-time Bitcoin with a 2+ year track record of successful forecasts.

What do I mean by this?

Pizza-Bitcoin was cheap because it lacked liquidity.  Only a few knew about Bitcoin.  Fewer still believed it could have value.  As awareness of Bitcoin grew and the realisation that yes, people can create their own digital value, Bitcoin became liquid and the most successful asset of the decade.

In fact Bitcoin is a case study right out of the Venture Capital playbook, except no VC was involved:

VCs want to be in at the illiquid seed stage.  That is where there is greatest upside potential for least capital outlay.  The people that got into Bitcoin, perhaps unwittingly, were acting as seed-stage VCs to the fledgling asset.

Fast forward to today.  Bitcoin Enhanced is in exactly the same position as Bitcoin in 2009 with the added advantage that the algorithm that forecasts when to short Bitcoin has a proven track record.  The exact same VC roadmap applies:


In order to mimic the seed-stage environment Bitcoin Enhanced tokens are presently at a 99% discount to the Target Price (a combination of the current BTC price and the simulated results of the Bitcoin Enhanced short forecasts).

The first 40,000 tokens are sold at this 99% discount, the next 40,000 at 98% discount and so on until all 4 million tokens have been sold and are trading at the full Target Price.  The result?  Bitcoin has done it.  VCs have been doing it for years:


Bitcoin Enhanced is an example of a new asset class called Self-Managed Investments (SMIs).  As more become available they help rebuild portfolio diversification through what I have called Robust Finance.

Bitcoin Enhanced shares the same features that make Bitcoin a free market where speculative returns are still possible and the risk quantifiable.  Better still there may be still be time invest when the least money buys the greatest upside potential. 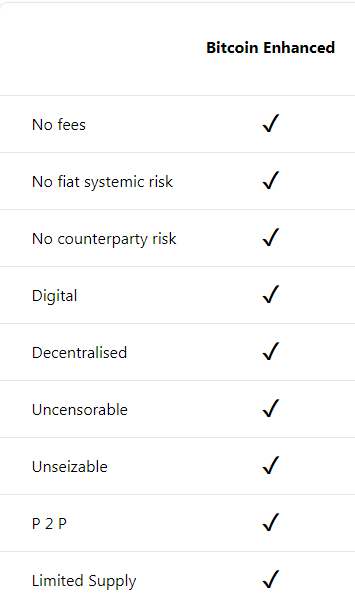