Corporate Migration onto the Bitcoin Network – A Complete Roadmap

With a similar compelling logic that secures the Bitcoin blockchain monetary expansion has propelled companies onto a trajectory where survival means transitioning to sound money.  Bitcoin is rapidly gaining acceptance as a preferred balance sheet asset with firms such as MicroStrategy, Square and Tesla leading the way.  But digital transformation of the balance sheet is just one step.  We outline here the full roadmap to include both balance sheet and P&L conversion from fiat to the Bitcoin monetary network.  Each step of the process provides competitive advantage to the first firms.  Yet each step also compels the next until the transition process is complete.  There is no halfway house.  Only once firmly established on the Bitcoin network can companies once again compete in their respective sectors to return shareholder value.  The Bitcoin backed stable currency necessary to complete the roadmap has been developed and is in the process of being implemented.

For Michael Sayler, CEO of MicroStrategy, the March event prompted a profound rethink of corporate strategy.  If expansion of money supply represents the cost of capital, what asset can companies hold on their balance sheet that would compensate them for the headwind of a 24% devaluation of fiat denominated assets?

“If money supply is expanding at, say 15% and purchasing power keeps degrading and if you hold for 8 years you lose 75% of value.”

Sayler contends corporations face a $200 - $300 trillion addressable problem, money is not sound.  Not only is this an issue for corporate treasuries, but as Sayler puts it, the tripling of the cost of capital has put most companies underwater.  What corporate can return in excess of the 24% annual debasement of the currency?

Sayler’s answer has been to turn to Bitcoin.  After 12 years, 100 million owners and average annual returns of 200% p.a. Sayler sees Bitcoin as fast becoming a preferred treasury asset.  The security of the decentralised blockchain means that unlike fiat, the asset cannot be degraded from over supply. In this respect it is more thermodynamically sound that gold whose supply increases through mining at 2% a year.

On August 11, 2020 MicroStrategy revealed its first Bitcoin purchase worth $250 million. On September 14, 2020 the board of directors adopted a new treasury reserve policy making Bitcoin the company’s primary treasury reserve asset.  As of 1st March 2021 the company holds 90,859 BTC acquired for $2.19 billion, roughly half their current worth.[1]  Since making its first BTC purchase MicroStrategy stock is up 480%.

MicroStrategy is not alone is transitioning its treasury assets onto the Bitcoin network.  Jack Dorsey’s Square and Tesla now hold the coin on their balance sheets.  However as we outline here the conversion of the balance sheet to Bitcoin is but one step in the response to the addressable issue that money is not sound.  Other steps follow as corporations make their transition to hard money.  The logic of each step inevitably leads to the next as companies effect the necessary changes to return to a “business as usual” environment.

Loss of purchasing power creates a headwind for profits that few companies can beat.

What asset can companies hold on their balance sheet that outperforms the rate of monetary expansion?

Free cash flow is toxic – cash is an asset depreciating at the rate of monetary expansion.

Loss of value proposition - what investor would hold stock in a company when Bitcoin has a 12 year track record of 200% gains per year?


Step Two – Migration of Balance Sheet to the Bitcoin Network

Holding Bitcoin as a treasury reserve asset solves the problem of value debasement from fiat denominated assets.  As the MicroStrategy, Square and Tesla experience demonstrates, adopting BTC as a reserve asset is also self-fulfilling – the act re-enforces confidence in the BTC network and increases BTC’s price.

Treasury has removed the headwind of monetary debasement from the balance sheet.  However profitability from operations still cannot compete with the rate of monetary expansion.

Loss of value proposition: The rationale for investment in the company remains dubious at best.

In this situation the most profitable activity a company can undertake is to leverage its balance sheet and secure low interest loans to purchase more BTC.  Debt denominated in a depreciating currency has low real cost upon maturity.  In return the company secures more of an appreciating asset.  This boosts the balance sheet and share price of the company.

Profitability and shareholder appeal largely depend upon how much a company can borrow to purchase BTC.  Core operations play only a subsidiary role to this process by increasing the company’s ability to borrow.

Financial improvement is not from core operations.

The P&L statement, denominated in a depreciating asset still faces the headwind.

Loss of value proposition - there remains no clear rationale for investors to hold company stock instead of investing directly into BTC.

Accepting payment in a depreciating currency means customer spending power decreases – their money buys less each day.  Increase in sales becomes a function of currency debasement rather than real growth.

Free cash flow (FCF) can be used to establish the cost to the company of receiving payment in fiat:

For example, as of January 2021 Walmart has free cash flow of $25.81 billion.  If the rate of monetary expansion is 15% then Walmart will lose $3.9 billion in purchasing power this year.  In five years their purchasing power will have halved. 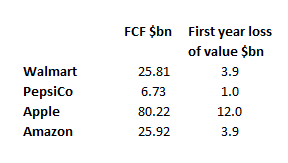 First year loss of purchasing power from free cash flow (FCF) assuming a 15% rate of monetary expansion for leading firms.
But unlike holding BTC as a treasury asset Walmart cannot price its Tuppleware or Apple its iPad in a currency as volatile as BTC.  No P&L account would be readable in a unit of account that can lose 20% of its value in a day.

For the same reason no consumer would wish to earn in a coin prone to such fluctuations.  Budgeting would become as impossible for the weekly shopping as it would for corporate expansion projects.

In other worlds the migration of revenue onto the BTC network requires the use of a BTC backed currency with stable value. This new currency has been developed and is in the process of being implemented.

The currency uses BTC as collateral.  Excess reserves from any appreciation in the value of BTC are periodically returned to currency holders.  This gives corporations the double benefit of a stable currency for revenues with the asset appreciation of BTC.
Customers are equally incentivised to switch to the new currency because of the appreciation potential of BTC.  They now use a currency that rewards them.

A further benefit of the new money is that it enables both corporations and their customers transacting in it to avoid BTC’s downside volatility without compromising the upside. 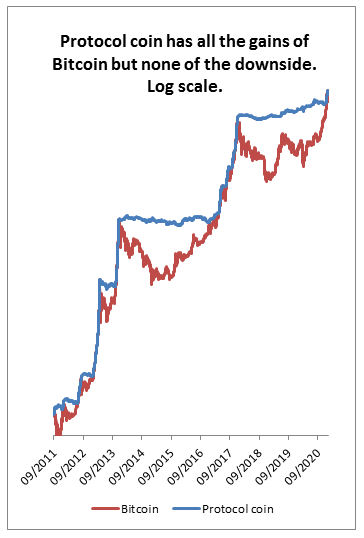 The new currency has the near-equivalent asset appreciation potential of BTC, the stable value required of a means of exchange and the ability to avoid BTC's downside volatility as shown here.
Step Five – “Business as Usual”

Both the balance sheet and the P&L statement have now migrated onto the BTC network.  With the return of sound money as the basis of operations the headwind created by fiat monetary expansion disappears.

The first corporations to complete the migration have significant advantage over competitors still having to battle the debasement of their means of exchange and unit of account.

The investment proposition returns.  There is now no gain to owning BTC rather than owning shares in the company.  Both benefit form BTC value appreciation.  Investors again focus on the fundamentals of a company’s core operations in their given sector as the source of shareholder returns.

In effect investors look to the corporation for returns better than those from simply owning Bitcoin.  From their position in step 1 of being unable to compete with the value proposition offered by BTC, companies now are able to recommend themselves to investors on their ability to provide greater wealth accumulation than simply holding BTC.

Companies have completed the competitive race to switch monetary networks from fiat to Bitcoin.  As the majority of firms complete the transition monetary strategy is no longer top of the corporate agenda.  It becomes a condition for business while true shareholder value creation returns to the core competences of the firm in its sector.